Betty Blue Eyes is a rare case in musical theatre these days: a success in terms of story, character and humour. Based on the movie A Private Function, conceived and scripted by Alan Bennett and Malcolm Mowbray, the the musical succeeds in delighting and charming its audience with a message of social equality, set against the slow bubbling frustration of British post-war austerity. 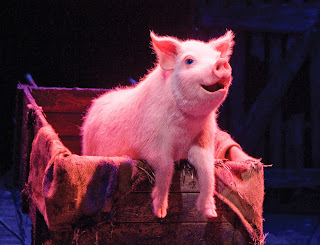 It is thanks to the actor, Reece Shearsmith, that Gilbert’s songs are the most moving. He is humble, kind, and nervous, playing the emotionally deepest character in a line-up of three-dimensional characters. His solo renditions in ‘A Place on the Parade’ and ‘The Kind of Man I Am’ track his climbing and falling self-confidence and hope, which form one of the crucial emotional investments. Equally illuminating are the flashes into the imagination of Gilbert’s wife, Joyce (Sarah Lancashire), which soften her otherwise ruthless, easily detestable Lady Macbeth character.

The audience was largely made up of older folk, who can remember this post-war era. Though you don’t have to remember it to enjoy the show, it is clearly not targeted towards small children, since there are sexual references and ineundo throughout. However, the farcical aspects are most fun, and have very wide appeal. The number ‘Pig No Pig’ is an hilarious scene, involving the central family trio, Joyce, Gilbert and Joyce’s Mother Dear. The actors seamlessly combine their lines and movements with the fun music and its witty lyrics.

Betty Blue Eyes reminds us of two more excellent musicals, Blood Brothers and Billy Elliot. They are all about real people, struggling in real, historical settings, with unlikely situations thrown at them. The best stories those we can relate to, which is why this one works so well.