The Wizard of Oz Review

The new Andrew Lloyd Webber production has had a year long build up thanks to the BBC’s search for Dorothy. Over the Rainbow has found two, Danielle Hope, the winner, and Sophie Evans, the runner up, who takes her place in some of the shows. Does the musical earn the reputation which the talent show has built? 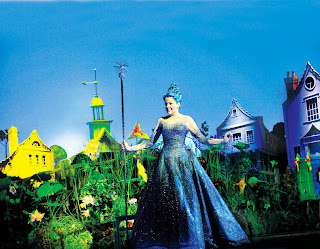 Well, the garish appearance of Oz within a sepia Kansas farm is done with theatrical pazazz. The impressive projection design from Jon Driscoll, and copious amounts of stage smoke, convincingly show the famous tornado. Then Glinda the good witch descends in a cascade of purple glittering skirts that stretches the length of the stage. This tour de force of theatrical design and technology will amaze children an adults alike.

However, Andrew Lloyd Webber’s musical additions are generally unremarkable in comparison to the jaunty originals. Michael Crawford’s solo piece ‘The Wonders of the World’, falls particularly flat, perhaps due to its superfluity within the plot. The wicked witch’s ‘Red Shoes Blues’ is more successful, filling a gap in Herbert Stothart’s score. Hannah Waddingham is unrecognisable as the hook-nosed witch, and has the most awe-inspiring stage presence of the show.

Sophie Evans does an admirable job as the alternate Dorothy, hitting all the right notes of sweet and defiant, though in solos her voice lacks force. David Ganly, as the Lion, has the perfect mix of bravado and fear, but Paul Keating is our favourite. His floppy, forgetful and cheerful Scarecrow is as dear to the audience as the Munchkin community (thankfully normal sized and cute, rather than oompaloompa-sized and irritating). 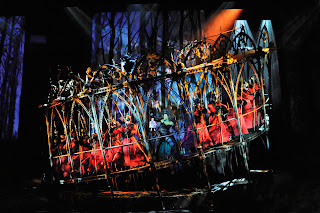 It is a shame that some of the show’s heart is lost in the epic feat of design. As you are taken in by the spectacle of the show, you forget about the characters, even played well. The relationship between Dorothy and the friends she meets is meant to carry the show, not the artistic flair of the design team. The latter overwhelms the former. Somehow, Dorothy’s goodbye to the Scarecrow is not nearly as teary as in the film; it will pull heartstrings, but not tightly enough.

In many ways its still an impressive production, particularly appropriate for family viewing. The yellow brick road has never been more yellow, the emerald city more green, or the munchkins more tall -- but if you’re in floods watching the end of the Judy Garland film, don’t take it as given that you will be on watching this.

You can see the Wizard of Oz at the London Palladium until September 2012!