Springsteen and Pearl Jam to rock Manchester in June 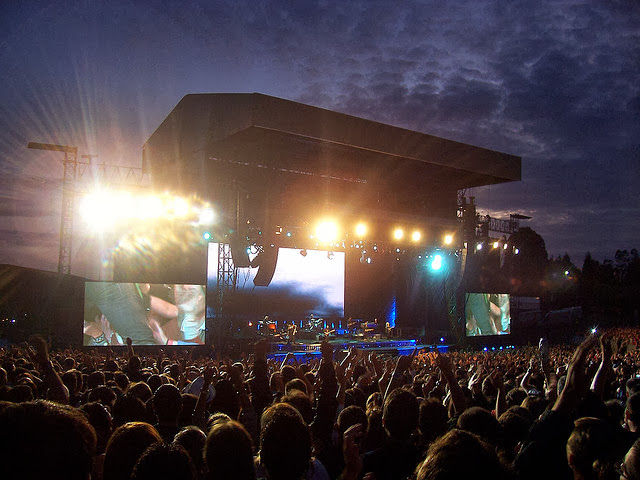 Two heavyweights of the world of rock are to descend on Manchester within hours of one another in June.
In the height of summer, American rock icon Bruce Springsteen and Seattle grunge gods Pearl Jam will entertain crowds at the Etihad Stadium and Manchester Arena respectively.
The Pearl Jam boys are scheduled to hit the Arena’s stage on Thursday 20th June and will play a second gig the following night at the same venue.
The Seattle rockers, fronted by Eddie Vedder, have been together since 1990 and are still playing to sell-out crowds. They have gathered legions of ardent fans over the years and their distinctive sound has set new standards with every album.
The British leg of Pearl Jam’s tour includes two dates in Manchester and one at the Isle of Wight Festival, after which they’ll be jetting off to Amsterdam, so the party will be short lived but as intense and emotive as it always is with a band like Pearl Jam.
Springsteen, AKA The Boss, is due to play to a sell-out crowd at the home stadium of Manchester City FC.
The magnificent structure houses around 60,000 people for big-scale concerts and Springsteen certainly justifies that label. For decades, he has been one of the biggest and most popular rockers in the world, selling out tour after tour and cementing memory after memory in the minds of his fellow rockers.
The date with the Etihad Stadium marks one of only a handful of UK gigs for The Boss and his band, with dates scheduled at Sunderland FC’s Stadium of Light (a stadium with famously mind-blowing acoustics) and the Isle of Wight Festival in the same month.
Springsteen will be entertaining Sunderland while Pearl Jam rock Manchester on the 21st June and Pearl Jam are on the bill for the Isle of Wight, too.
Are you attending the upcoming Bruce Springsteen tour of any of the Pearl Jam tour dates? Got any favourite Bruce Springsteen songs or Pearl Jam songs? Let us know!
No comments:

In style, tone and crass joke abundance, Horrible Histories – Barmy Britain is satisfyingly close to Terry Deary’s books, on which it is based. It’s a whirlwind, whistle-stop tour through the funniest of the lot, updated for the 21st century stage. In Ruthless Romans, pickled fish guts are on the menu in Masterchef; in the Slimy Stuarts, Guy Fawkes appears as a contestant in Who Wants to Blow Up Parliament?; in the Frightful First World War, Earl Haig returns from the Somme to be blown to pieces in the board room, by a vicious Alan Sugar.

As staunch supporters of the Horrible Histories in getting kids into history, we thoroughly recommend this show for families and school parties. The fun historical content, catchy songs and fart jokes are for a target age group of about 6 to 12, though suitable too for the very young. However, as well as pitching itself to the original readers of the books, the show has also done well to appeal to the larger variety of audience ages who enjoy the CBBC television programme. Parents will enjoy nods to parodies of modern television, particularly the Benedict Martin’s caricatures of Phil from Relocation, Relocation, and The Apprentice tycoon, Alan Sugar. If, for adults, the level of humour is a little less sophisticated than the television programme, we think this is entirely in keeping with the demands of the changed medium.

The impressive enthusiasm of the two actors, Lauryn Redding and Martin, never lets up, and is enjoyably infectious. At only an hour long, there are noticeable gaps in history, and there is no mention of dates, which might confuse a younger history enthusiast. Historical accuracy or complexity is clearly not the aim of the show; hilariously, ‘Henry VIII was a very fat man,/ He liked to stuff his face from a frying pan’ is the chorus line of the most catchy song. Though we think it was right not to overload this show with dates and facts, it does well in proliferating stereotype. Nevertheless, there are one or two interesting nuggets you might not have known. You’ll find out how far the British advanced for every soldier killed in the Somme; it is a shockingly small distance, showing that even the most exaggerated, funny historical accounts can also be poignant.

Barmy Britain certainly left us with the firm impression that history is ruthless, vile, terrible, vicious, frightful, slimy and horrible, in all the best ways. It is equally patriotic and ironic and shows the fantastic ability of Britain to laugh at itself. Excellent entertainment for all the family, and (maybe) educational too.
No comments: