Today we want to share one of our readers' review for Sweeney Todd musical. Thank you Allison for taking the time to share your experience with other theatre lovers!!
“I was so excited as my son had surprised me with a trip to the theatre for my birthday and it was a musical that we both wanted to see.
As you look at the posters outside the theatre, a shiver runs down your spine. The menacing stare of Sweeney Todd looking at you gives you goosebumps. What awaits inside? 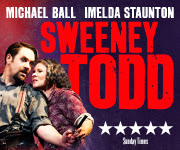 We took our seats in the stalls about 15 minutes before the performance and notice people on stage already. I thought it was just backstage crew getting the stage ready, but it was actually actors going about their business. I have never seen this before. The lights went down and the music belted out around the theatre. Sweeney Todd (Michael Ball) appears with a dark look and a fantastic voice. The story begins with Mr Todd returning to London after being imprisoned for the past 15 years and is seeking his wife and daughter. He arrives with a young man he met on the ship, Anthony Hope. They are then propositioned by a beggar woman, who recognises Mr Todd but is soon dismissed. Sweeney Todd finds out that his wife committed suicide and his daughter is being brought up by Judge Turpin (the judge who imprisoned him). Mr Todd wants revenge!

He meets up with Mrs Lovett (Imelda Staunton), who owns a pie shop on Fleet Street and makes the most dreadful pies. She tells him the story of Benjamin Barker and how he was sent to Austraila by Judge Turpin. The judge then lured Lucy (Benjamin’s wife) to his house and rapes her. Lucy then takes her own life and the daughter, Joanna, goes to live with Judge Turpin. Mrs Lovett starts to think that Mr Todd could be Benjamin Barker.She wonders how Mr Todd will make a living and shows him the silver razors, that she has kept since Mr Barker went to Australia. Mr Todd then rents the room above the pie shop and opens a barbar’s shop.
The story unfolds around the pie shop, the barbar shop and Sweeney Todd’s revenge on Judge Turpin. The whole musical is memorizing from start to finish. The acting is incredible. The music unbelievable. The throat cutting looks very realistic. Michael Ball is sooo good as Sweeney Todd, but Imelda Staunton steals the show as Mrs Lovett. She has some great one liners and is hilarious. The show has so many different emotions thoughout.
I would recommed this show to anyone who loved the film version with Jonny Depp (it is very much like the film) or to anyone who just likes a good night out at the theatre. I can’t wait to go again!”
Allison Potts