Carley Stenson: The New Princess Fiona in Shrek The Musical 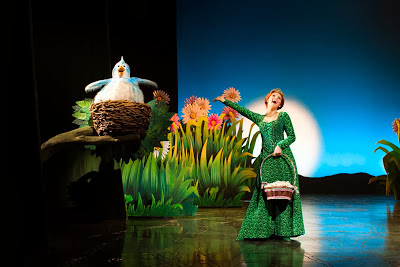 Kimberley Walsh has starred as Princess Fiona in Shrek The Musical for the last time and has now passed the baton to fellow west-end actress Carley Stenson.
Carley, who was a part of Hollyoaks for 10 years left her beloved character of Stephanie Cunningham behind her in 2010 to make the leap into theatre which had always been the biggest dream of hers. Saying at the time that leaving “Hollyoaks is one of the most difficult decisions I have ever made. It has been my dream job for ten years… I am very sad to leave but I’m ready for new challenges and I’m looking forward to pursuing a career in musical theatre.”
It seems as if the risk was worth it! Having already starred in the West End musical, Legally Blonde, playing the lead role of Elle Woods, we think she’ll easily be able to fulfil Kimberley’s shoes! Judging by the pictures of her as Princess Fiona, she looks made for the part, leaving the blonde behind her and embracing the red hair, which we must say, she does suit very well!

She took to Twitter to finally announce her new role saying “ I will be playing princess Fiona in westend’s shrek from 23rd may”, and explained that she is very excited and has always wanted to be one (a princess, not an ogre we assume!).
It seems that performing in West End has opened up some great opportunities for both Carley and Kimberley. We are sure that Carley will make the perfect princess… and ogre.
Shrek The Musical is booking until March 2013 at the Theatre Royal Drury Lane in London.
For those curious, you can read The Telegraph's critic's review for Shrek the Musical here.