Andrew Lloyd Webber, the musical theatre writer, was on the red carpet at the O2 on Friday, to be awarded a Nordoff Robbins O2 Silver Clef Award for Lifetime Achievement.
Jessie J presented the award.  She was also a winner at the awards, alongside the likes of Manic Street Preachers, Michael Buble and Kylie Minogue. 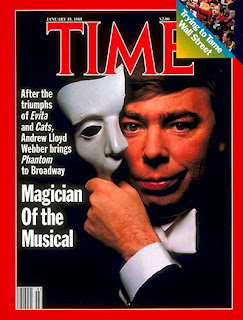 We think Webber a worthy winner.  He has written a whole score of hit musicals, from as far back as the 1960s  Here is our ALW timeline.
1965 – The Likes of Us
This was Andrew Lloyd Webber’s first collaboration with Tim Rice, though it was not performed until 2005, at the Lloyd Webber Sydmonton Festival.
1968 – Joseph and his Amazing Technicolour Dreamcoat
Lee Mead’s favourite musical began life as a short cantana, which parodied musical styles such as Rock ‘n’ Roll, calypso and country.  It was lengthened and rewritten after the cantana gained momentum and favourable reviews.  Eventually, it would become a 70s two hour production, has had many world-wide revivals and countless school productions since then.
1970 – Jesus Christ Superstar
This Broadway hit began as a rock opera concept record, and was a worldwide hit on album and in concert before finally debuting in Broadway, and finally in the West End in 1972, starring Paul Nicholas as Jesus Christ.  It remains a favourite with professional and amateur companies, and a new production is set to tour this year.
1975 – Jeeves
A musical adaptation of P.G. Woodhouse’s Jeeves and Wooster, this may have worked were it not for Tim Rice pulling out of the project.  The new collaboration between Andrew Lloyd Webber and Alan Ayckbourn was not a success – the show lasted only three weeks and is now largely forgotten.
1978 – Evita
Evita also began life as a concept album, and ‘Dont Cry For Me Argentina’ became a big hit.  The original cast of the West End production included Elaine Page as Eva Peron, and it ran for 10 years.   It was to be Tim Rice and Anrew Lloyd Webber’s last collaborative project.
1978 – Variations
A solo project with his cellist brother, Julian.  It reached number 2 in the UK charts, and the main theme remained the theme for the South Bank Show for 32 years!
1981 – Cats
Andrew Lloyd Webber’s first sin-lyricist project, Cats takes the children’s poetry of T.S. Eliot and creates the famous characters including Macavity and Victoria.  It was the longest-running West End musical at the time, at a massive 21 years!
1984 – Starlight Express
A big hit on rollerblades!  It ran from ‘84 to 2002 in West End, and had innovations in staging, with a track going all the way round the back of the auditorium.  After a ten year break, the show is now back on tour.

1986 – The Phantom of the Opera
Probably ALW’s biggest hit to date, totalling an amazing 26 year long run in the West End.  For a musical, its run is beaten only by Les Miserables.  It features a glowing, lavish opera-style set and story, and has the right mix of the eerie, the uncanny and the charming to run… forever!  It now has a big international following, and is the highest-grossing entertainment event of all time!
1989 – Aspects of Love
How do you measure a year?  525,600 minutes!  This collaboration with Trevor Nunn ran with an all-star cast including Sarah Brightman and Michael Ball.  Roger Moore was set to star later in the run – but pulled out as unable to cope with the ‘technical side of singing’.  We take this to mean he can’t sing!
2004 – The Woman in White
Based on a spooky, sensational novel by Wilkie Collins, The Woman in White only ran for 3 months and gained mixed reviews.  A shame, since this was in part due to its star Maria Friedman being away frequently for cancer treatment.  With the classic virtuous heroine and creepy foreign viliain, it should have been a great show!
2009 – Eurovision Song Contest
In 2009, Sugar Babe Jade Ewan was chosen to sing for Eurovision.  The song chosen was one of ALW’s new songs for Love Never Dies, ‘This is My Time’ which also launched this year.  Britain came 5th, which wasn’t bad, since we have a recent record of doing very poorly indeed.
2009 – Love Never Dies
Aa sequel to the successful ‘Phantom of the Opera’ in which the fairytale ending for Raoul and Christine is revealed to be not so fairytale after all.  It did reasonably well, but was not a hit like the original musical, and closed to the West End in 2011.
That’s an impressive lineup of musicals for the hero of British Stage theatre, with more hits (Cats, Phantom of the Opera, Joseph, Jesus Christ Superstar) than obvious flop-fodder (Jeeves, The Woman in White).
Superstar, The search to find JC in the up and coming tour of Jesus Christ Superstar starts next weekend on ITV One.
Well done Andrew, may the Lord have many more musical making years to come!