A new run of Our Boys plays the Duchess Theatre from Septembe. The cast has just been announced, and it’s an impressive one. 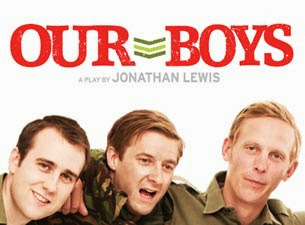 Laurence Fox, most famous for his lead role in ITV’s Lewis will take on the role of Joe, whilst Matthew Lewis, Harry Potter’s, infamous character Neville Longbottom will play Mick.
Joining these two will be;
- Cian Barry, (New Tricks, Titanic)
- Lewis Reeves (Holby City, White Van Man)
- Arthur Darvill (Doctor Who)
- Jolyon Coy (Posh, All’s Well That Ends Well)
The original play, written in 1993 tells the story of five young soldiers recovering from war injuries. The arrival of a young officer ruins their daily routine of TV and banter the boys have got so used to. A dangerous incident and betrayal lands them in trouble with army officials and that’s when the real fighting starts.
It seems just a good and poignant time to run this play now as when it was first run in 1993. With much controversy surrounding wounded and veteran soldiers, this is sure to get people thinking.
For Fox, who is preparing to film the last series of Lewis, this will be a new challenge to conquer. Speaking of him and his co-star Kevin Whately, ”Kev and I have decided we want to do other things, otherwise it all gets a bit ‘samey’,” he told The Telegraph.
Like many of the plays opening this year, Our Boys will have tickets for sale from £10, to encourage more people to go to the theatre, and particularly plays. It joins Michael Grandage’s series of plays as well as Alan Ayckbourn’s A Chorus of Disapproval in offering audiences £10 tickets.
Our Boys is booking now for performances starting 26 September until 15 December 2012.