Simply, Ghost is story of a love which transcends death. When Molly’s devoted boyfriend, Sam, is killed, he remains on earth to save Molly from the same fate. The original movie’s true sense of grief, frustration, and overwhelming love puts it in the top ten list of movies of all time for most of the female population of the English speaking world. It won’t be hard for the new Ghost musical to draw an audience - it has one, teary-eyed and readymade, right here. How does it live up to the expectation derived from the hit film? 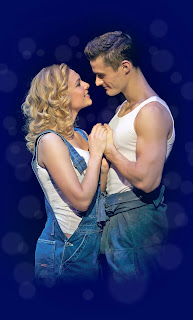 Ghost’s design relies largely on digital projection and screens to simultaneously depict the ethereal nature of the ghost story, and the commercial bustle of professional New York. It's all very impressive, thank you Jon Driscoll, the technical mastermind behind the brilliant visuals. Especially spectacular are the dynamic train sequences, which ingeniously mix film projection and live acting to recreate a moving train on a still stage.

Unfortunately, its all too much: we wonder when theatre became cinema. Some touching scenes between Sam and Molly, including the classic pottery-wheel scene, are swallowed by the intrusive technological designs, and flashy special affects, which try to give the ghosts their powers. Attempts to be modern, American and ghostly sacrifice the poignancy of what should be one of the greatest tear-jerkers.

Individual performances are commendable. We find Cassie Levy, as Molly, moving, and Fleeshman’s portrayal of Sam’s frustration powerful. They cope well with some unremarkable songs, but excel in the good ones: ‘Here Right Now’ is Levy’s finest moment, and ‘I Had a Life’ Fleeshman’s. However, in general the music has too much of a pop, techno feel, and would sound more familiar from home stereo than a West End stage. The other exceptions to this are the songs of Sharon D Clarke, the seer Sam uses to save Molly. Her songs are uniquely those which sound right on a stage. While the glizty, show number ‘Outta Here’ sits badly alongside the slick, modern style of the rest of the musical, it still felt the most like a musical. Clarke’s hammy performance is welcome, and steals the show.

Ghost is the epitome of ‘all style, no substance’. If the bright New York lights could be reigned in, this might allow Levy and Fleeshman to shine: both great actors, they may have on-stage chemistry if only it were allowed to blossom. It is, after all, Molly and Sam’s transcendental love which made Ghost, the movie, a winner. 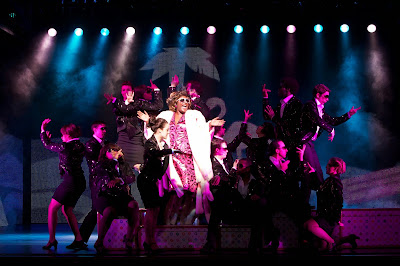