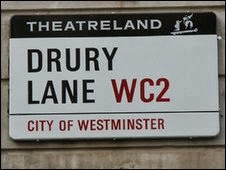 We theatre-goers have learned its possible to eat cheaply in the West End if you know where to look. Check out these restaurants, sorted by West End region, for a cheap meal before your West End show.
The Haymarket area - Royal Haymarket, Prince of Wales Theatre, Her Majesty’s Theatre
The Stockpot
A lovely little cafe restaurant, the original is just off Haymarket. The two-course set menu is very fast, particularly if you tell them you’re on a pre-theatre schedule. The food is quite simple, but hearty and tasty.  £20 for a meal for two, and soft drinks.
38 Panton Street
One Man Two Guvnors is now showing at the nearby Theatre Royal Haymarket.

The Soho/Shaftesbury Avenue area – Prince Edward, Phoenix, Palace, Lyric, Apollo, Gielgud
Soho Joe
Great, quick pizzas — good quality, and reasonably priced.  Privately run means that the service is not only friendly but also personal. At £7 a pizza its a bargain, but watch out for the pre-theatre crush! £7 a pizza, £25 for a meal for two with sides and soft drinks
22 Dean Street
Moolis
Indian street food, famous for its Goat (yum!), but it does all other meats too. The dahl (a filling lentil soup) is particularly good value for money. Great to take away, if you’ve ended up particularly pushed for time. Meat wraps or salads and dahl for £9
50 Frith Street
Jersey Boys is now showing at the nearby Prince Edward Theatre.
The Aldwych area – Royal Drury Lane, Fortune Theatre, Aldwych, Duchess, Lyceum, Novello
Sagar
There are three of these, one in Soho, and one in Covent Garden, and one in Hammersmith over in the West.  It is probably the Covent Garden one you will go for – unless you’re somewhere like the Dominion Theatre to see We Will Rock You near Tottenham Court Road, and fancy a trek north. It does Vegetarian Indian food.  Is tasty and quite cheap, and filling – even though its veggie!  £25-30, a one course meal for two with soft drinks
31 Catherine Street
The Lion King is now showing at the nearby Lyceum Theatre.
Leicester Square Area – Arts, St Martin’s, Ambassador’s, Wyndham’s, Noel Coward
Baozi Inn
Good, cheap chinese food. The famous pastry baps are very speedy – definitely worth a try if you’re in a rush – and the noodles are really good too. If you’re in Leicester Square, and fancy chinese, China Town is the place to go – and Baozi Inn in particular.  £20-25, a one course meal for two with soft drinks
26 Newport Court
Stomp is now showing at the nearby Ambassador’s Theatre.
The Picadilly Circus Area – Criterion, Jermyn Street, Prince of Wales, Harold Pinter
Toku
A great, fast japanese restaurant with tempura, sashimi and sushi as favourites. The Dragon Rolls have extra eel. This is not a very cheap option but its on the list because its good value at least.  £25-30, pre-theatre menu with drinks.
16 Regents Street
Mamma Mia! is now showing at the nearby Prince of Wales Theatre.
Have we missed out any favourites of yours that you would like to share?