Our reviewer Rachel Hutchings went to see Jersey Boys last week, and had a blast! Rachel tells all on the jazziest musical in the West End.
Oh what a night indeed!
‘fun frivolity, and frantic, foot-tapping’
Jersey Boys provides fun frivolity and some frantic foot-tapping numbers from Frankie Valli and the Four Seasons. It opens on the New Jersey street corner and follows the band’s search for a new member, and ends with their inevitable self-destruction. Jersey Boys portrays a tale of relationships and arguments, family break ups and deaths amidst the hedonism of Swinging Sixties’ Rock’n'Roll.
‘lovely nostalgic touches’
The show has been adapted from a book by Marshall Brickman and Rick Elice, chronicling the journey of Frankie Valli and his Four Seasons. Conversations with songwriter Bob Gaudio and Frankie Valli himself provided valuable insight into New Jersey life. The attention to detail is clear and there are some lovely nostalgic touches with black and white film from actual radio and television performances acting as a backdrop for significant musical moments. 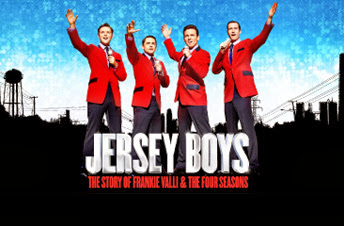 ‘avoids the trap of karaoke’
The show does not demand any serious concentration or reflection. While there are solemn moments, notably family tensions and tragedies as well as friendship and money friction, these are few compared to the energy and vibrancy that comes from songs such as ‘Can’t Take My Eyes Off You’ and ‘Beggin”. Jon Lee as Frankie was a captivating falsetto and had oodles of charm. He was perfect for the sympathetic and loveable Frankie, which complemented the resident bad boy and frequent felon of the group founder, Tommy DeVito. Avoiding the potential trap of becoming too karaoke-esque, the actors had great chemistry and were very strong.
‘the swing were lively and exuberant’
The numbers, the set, the accents and the atmosphere all take you back to 1960s America.  Blues bars and hotel rooms are brimming with great tunes, and with brilliant comic moments such as the facial expressions and deep Italian American slurs from bassist Nick Massi. The swing were also lively and exuberant. You will squirm at the casual sexism against the women who play parts on the group’s journey including waitresses and reporters, following DeVito’s early classification of the ‘two types of women’. You become just as immersed in the androcentric world of ‘the road’ as the performers are themselves – but you laugh in spite of yourself.
‘an uncontrollable urge to dance’
The audience comprised mostly of the middle-aged. Content is violent in parts, and the language explicit throughout – so not for young children. The aspect made for a retrospective look at youth, innocence and a lost musical style. Guaranteed to leave you wandering into Soho with a huge smile and an uncontrollable urge to dance, Jersey Boys is well worth a visit.