Woman in Black – Our Reader's Review

Our reader, Kylie, went to see The Woman in Black at the Fortune Theatre. Check out what she thought!
The Woman in Black, currently playing in London’s Fortune Theatre achieves what so many big budget Hollywood productions fail to achieve. With two men, two chairs and a wicker basket, the Woman in Black takes the audience through an increasingly unnerving exploration of a truly frightening tale. The story begins with Arthur Kipps, an aging lawyer (played by Ken Drury) with a story to tell. He enlists the help of a young actor (played by Richard Best) in the hopes that his assistance will enable him to learn the art of engaging story telling, and that once this awful story is told he will be free of it.

We love the theatre blog ‘The Hutton Inquiry’, written by Dan Hutton!
Who and what?
He’s a student at Warwick University, big into drama there, and reviews shows from all over the country.
Dan reviews mainly drama, with some musicals and festivals thrown in for good measure. Playwrights such as Shakespeare, Shaw and Coward pepper his blog, but there are many new writers there too, writing for both large and small venues.
Why do we like it?
Dan is provocative and truthful without being overly harsh or pompous. He tells it as he sees it in the most accessible way possible. For the record, we often don’t agree with him, but he always makes clear the grounds on which he comes to an educated conclusion. Go to Dan for open, intelligent analysis and logical, thought-provoking writing.
Posts of Note
Lots of stuff about the Fringe… And then:
Dan Hutton’s blog: The Hutton Inquiry
No comments:

Day Seats are a great way to save money on the theatre if you have the time to queue up.
What are Day Seats?
Most theatres showing big demand musicals keep reserved a number of seats, often the front row of the stalls*, for box-office purchase on the day of performance.
*these seats can be a great view, or restricted, depending on the venue. It is best to check with the theatre box office.
How Can I Get Them?
Tickets normally go on sale at box office opening, 10am, on a first come first served basis. They are most often priced at £25, though it does vary. They are usually two tickets per person, sometimes just one.

It seems all the latest musicals have cinematic roots. It was only a matter of time before the four part film franchise, Shrek, joined the growing list. We had high hopes for it; there is no doubt that the first two films in the series are superb, full of jokes for the little ones, witticisms for the parents, and an unlikely romance that will make you go all fuzzy inside, without being sickening or sentimental. 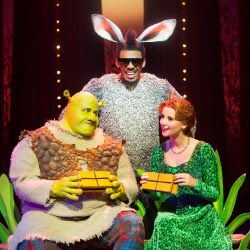 In the main, this has transposed well to the West End Stage. The fart jokes, larger-than-life costumes, and stylised set was in keeping with the look and tone of the animated films. The book by David Lindsay-Abaire includes all the best jokes of the film. No Shrek musical would have been complete without the ‘Ogres are like onions’ exchange and ‘You have slain the dragon?’; ‘Its on my To Do list!’

Unfortunately, we also think no Shrek musical would be complete without someone to equal Eddie Murphy, as Shrek’s talking sidekick, Donkey. Richard Blackwood delivers the same lines with tart humour. Though they earn a giggle, we can’t help thinking of the simultaneous roar and pathos with which Eddie Murphy’s Donkey was greeted in the cinema. On the other hand, Nigel Lindsay equals the superb Mike Myers as Shrek, spot on with the ogre’s gallows humour.