Singin' in the Rain Review

Chirpy and cheerful, Singin’ In The Rain is the perfect antidote to any rainy day in London. The show captures the golden age of Hollywood and is sure to be around for a long time.

Set in Hollywood, 1927, the show revolves around the made-up studio ‘Monumental Pictures’ and its transition from silent movies to ‘talkies’. Talking pictures become a problem for infamous onscreen couple Don Lockwood and Lina Lamont, who unfortunately has a very squeaky, unbearable voice. Don meets aspiring stage actress Kathy who ends up secretly dubbing Lina’s voice to save the sinking ship that is Monumental Pictures’ first talking picture.

Katherine Kingsley’s Lina was the strongest of the performers. Her screeching ‘Noo Yoik’ accent had the audience in stitches and truly was the standout star. Up and coming Scarlett Strallen played Kathy. Though she sung beautifully, her American accent was bordering on Lina’s unattractive squeal! Don, played by Adam Cooper, was a great all round performer, but lacked the natural charisma for which Fred Astaire was famed. 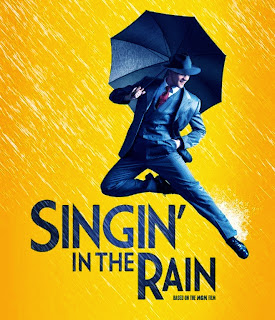 The set was simple and sepia toned, allowing for the bright lights and costumes to speak for themselves. The use of rainfall during the ‘The Singin’ In The Rain’ numbers were the highlights of the show. The rain combined with the iconic soundtrack and clever lighting created a truly mesmerising scene. The splashes caused lots of screams from the audience. Be warned if sitting in the front of the stalls - you will get wet!

It is true that the plot lost its way in the second act. However, it was still a great spectacle. The dancing was flawless and brilliantly choreographed by Andrew Wright. Ballroom, Charleston and a Bob Fosse-esque number added to the sense of golden age variety, but the tap dancing stole the show! Some of the best numbers included ‘Gotta Dance’, ‘Good Morning’ and of course ‘Singin’ In The Rain’.

Singin’ In The Rain is a light-hearted, all singing, all dancing trip back to the 20s, that the whole family can enjoy.