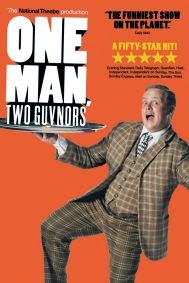 One Man, Two Guvnors is a brilliantly executed, belly laugh of a show! What struck us before the show had even begun was the range of ages in the audience. There were elderly couple, teenagers and even a few little ones, (although the content was a little racey, so not recommended.)  This just goes to show how this play has such widespread appeal, thanks to James Corden’s presence in the first West End run.

Set in Brighton in the 1960s, we meet Francis and follow him as he juggles the difficult job of having two guvnors. His confusion builds as he learns that the two bosses are arch enemies and the jobs become even more difficult! The plot is full of twists and turns that keep the audience guessing as well as keeping up with the energy of the actors.

Francis, played by Owain Arthur, has great rapport with the audience, even when at times it bordered on pantomime. His bouncy, energetic nature is maintained throughout his whole performance, and has a good balance of slapstick, wit and comedic timing.