Jersey Boys is the transfixing, gritty true life story of Frank Valli and the Four Seasons, the incredibly successful pop band, who have sold over 175 million records to date. The musical tracks the rise to fame of the four working class kids from Newark, New Jersey, who, against the odds, took the 1960s pop scene by storm.  The book, by John Lloyd Young, has a fun but touching mix of wit and empathy. Its genuine feel is thanks to real interviews taken with three of the boys, lead Frankie Valli, Bob Gaudio and Tommy DeVito, leading to narration which presents their zero to hero story from their own, compelling point of view. Of course, no story of Frankie Valli would be complete without all The Four Seasons’ most toe-tapping, catchy hits:  ‘Sherry’, ‘Big Girls Don’t Cry’, ‘Can’t Take My Eyes Off of You’, ‘December 1963 (Oh What a Night)’, ‘Walk Like a Man’, and ‘Rag Doll’.  If you love The Four Seasons, Jersey Boys is a definite must-see. If you don’t know them, by the end of the musical you’ll have fallen in love with their fun, pop beat, and the touching success story from some of the unlikeliest kids on the block.

Our Review of Jersey Boys 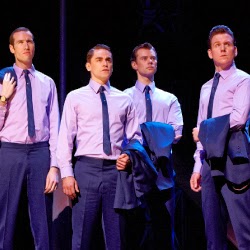 Jukebox musicals are the new way to make a quick smash hit. Unfortunately, their most common flaw is the wobbly plot, forced to accommodate a load of unrelated songs. Jersey Boys, thankfully, is different. It is based on the true story of the rise to fame of Frankie Valli and the Four Seasons, and includes all their most famous hits. The story-line feels neither forced nor unbelievable. You invest great hope in the blue collar band members from Newark New Jersey. The production shows us they’re real people, with real lives and struggles, not just four men in shiny suits. The message, that any man with a love of showmanship can go from zero to hero, has more weight thanks to this stark honesty.

However, the problems with the musical also stem from this inflexibility of a ‘true plot’. Since for most of the show the Four Seasons are on tour, the set must be changeable. It is therefore minimal, with token pieces of set being whisked on and off to demonstrate an office, a bowling alley, or a stage. We found the bare canvas dreary, and the moving props distracting. Inflexibility of plot also meant that many of the band’s hits come in quick succession in the first act, though they break this up by putting Rag Doll in the band’s reunion. What is particularly well communicated is the relentlessness of Bob Gaudio’s songwriting. Rather than finding unlikely stories to fit meaningless songs, the production highlights the immense pressure to come up with any ‘hit’ tune, however silly the lyrics. 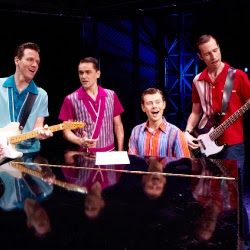 All four actors of the central roles are a convincing, but Ryan Molloy is particularly impressive in his imitation of Frankie Valli’s powerful falsetto voice. They even appear to have a sense of cohesion on stage, which adds to the disappointment when they later separate. The audience was surprisingly varied: there were plenty of people who would have known the Four Seasons in their heyday, but the auditorium was peppered with younger folk too. The catchy hits are perfect musical fodder for people of all ages, though bear in mind that due to scenes of violence and sex, and strong language throughout, the lower age limit of 12 should be adhered to. This show changed our attitude towards jukebox musicals. Jersey Boys is perfect for a Frankie Valli fan, or any musical fan who wants learn about the rise to fame of one of the most popular rock ‘n’ roll bands of all time.

Jersey Boys Trailer - A Taste of the Show

Frankie Valli - The lead singer, brought to stage at 16, and never looked back
Bob Gaudio - The main songwriter of the group, and keyboard player.  Gaudio doesn’t have the same showman’s flair as the rest of them
Tommy DeVito - The lead guitarist, and the original manager of the band. He’s also the most troublesome of the four, having spent time in jail
Nick Massi - The bass guitarist, and bass vocals. He taught young Frankie all he knows, though it occasionally meant breaking into churches
Joey - A young bowling alley clerk. Eager to please Tommy, he first finds Bob Gaudio
Lorraine - Frankie’s first girlfriend
Francine - Frankie’s daughter
Gyp - A mob boss, but he always looks out for Frankie, because he sings ‘My Mother’s Eyes’ so well
Bob Crewe - The Four Seasons’ fey record producer and lyricist
Mary - A later girlfriend of Frankie’s.