Les Miserables has been seen by over 55 million people worldwide, in 40 countries and 21 languages, and an English language adaptation has been running in London since 1984, making it the longest running musical in the world. It was composed by French composer Claude-Michel Schonberg with French book and lyrics by Alain Boubill, based on the novel by Victor Hugo.

Set against the backdrop of the French Revolution, Les Miserables, the musical, tracks the lives of characters including prostitutes, student revolutionaries, inn-keepers and children, all struggling for redemption and revolution. The action focuses around Jean Valjean, an ex-convict on parole, and his rehabilitation in revolutionary France. It is an epic musical, with a vast timeline and a whole host of three dimensional characters, deeply explored through their musical numbers. With majestic and dramatic score including Do You Hear the People Sing? and Look Down and emotive, personal renditions of Bring Him Home and I Dreamed a Dream, it is touching, transporting, and has timeless appeal. 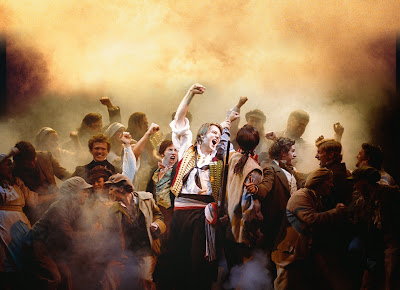 Duration: 3hrs, including interval
Admission:  Recommended age 10+. The theatre will not admit children under 4

Our Review of Les Miserables 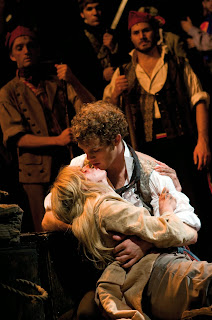 Les Miserables has become the world’s most famous musical, and the longest running in the West End. But what a down-beat subject for the most jolly of theatre genres! Its dark, its drab, and really rather miserable. So what makes it a global hit, and the Trevor Nunn and John Caird adaptation a West End legend in itself?

Firstly, the dramatis personae is greater than any rival production. There is a whole host of characters in dire, desperate situations, all whose pain feels tangible and tear-jerking. Your tears are for every one of them: to Valjean, who is on the run from the law for trying to support his family; to Eponine, whose unrequited love is slowly consuming her; to Marius, who grieves for all his friends he has lost to the cause.

Of course, its not all doom and gloom. The stirring theme ‘Do You Hear the People Sing?’ will stir your patriotic juices even if you’ve not a drop of french blood in you. Of course its about the French revolution, and the solidarity and belief of those that fought, but its also about war, freedom and destiny; universal themes, which will continue to captivate and move any audience, from any country, in any era. It is this that marks the timeless success of Les Miserables. 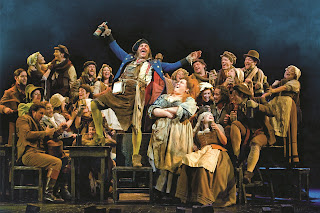 Since its removal to the smaller Queen’s Theatre in 2004, some scaling down has had to take place. The famous moving barricades have been replaced with a static set, but its easily as evocative of the simultaneous majesty and pity of war, as John Napier’s original massive pieces. Its also shorter in length, which we take as a good thing; over three hours was a mammoth of a production. More of the music is computer generated, a downsize in the orchestra accommodating the smaller pit at Queen’s Theatre. However, the dense score is so good (rarely does one musical have so many well known, excellent songs), and the story so engrossing that though the music is less powerful, it is hardly detrimental.

Les Miserables is the most spine-tingling experience you can have in the West End today. Though the material is more troublesome and depressing than anything conceived in the last ten years, it is infinitely better for it. Compare your reaction to this masterpiece with your reaction to such new musicals as Shrek and Legally Blonde (both fine productions of this era) and you can’t help to realise why Les Mis continues to draw full houses.

Les Miserables Trailer - A Taste of the Show

John Valjean - a convict on the run for attempting to support his family, and attempting jailbreak many times
Javert - an officer chasing Valjean
Fantine - a worker who loses her job and turns to prostitution to provide shelter for her daughter Cosette, at the Thenardier inn
Marius - a student revolutionary, friend of Cosette
Thenardier - an inn keeper and second rate thief
Madame Thenardier - Thenardier’s wife
Eponine - Thenardier’s spoilt daughter, mean to Cosette, who works at the inn
Cossette - Fantine’s estranged daughter
Enjolras - friend of Marius, also a student revolutionary
Gavroche - a small street urchin who helps to fight at the barricade