A beautiful Greek island paradise is the backdrop for a musical showcasing ABBA’s greatest hits, including ‘Waterloo’, ‘Chiquitita’, ‘Dancing Queen’, ‘I Have a Dream’ and ‘SOS’.  It is the day before 20 year old Sophie’s wedding. Her ambition to find her real father brings three men from her mother’s past all back to the island,  21 years after they were last there. Donna, the struggling, independent mother of Sophie, will capture your heart, and your admiration; her two best friends will make you roar with laughter.  Mediterranean sandy shores, white tavernas, and the charming story of a girl’s need for a father add setting, depth and story to ABBA’s songs of love, loss and friendship. The musical has had as widespread appeal as the band whose songs it sings, having been performed in 16 languages, in hundreds of cities all over the world. Be one of the millions to have been touched once more by the eternal relevance of ABBA’s songs to everyone’s love story. 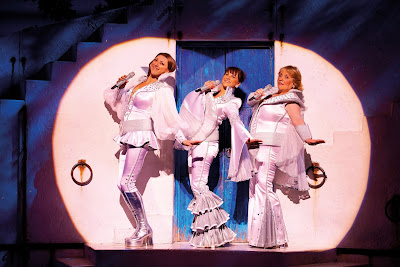 Duration: 2hrs 35mins, including 1 interval
Admission: Recommended age 5+. The theatre will not admit children under 4.

Our Review of Mamma Mia! 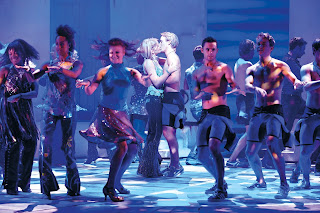 The many well-known tunes of Abba attract a wide audience for Mamma Mia!, but to create a convincing story which will allow these songs to gel is hard. Catherine Johnson’s attempt is configured to include sun, sea and songs. Sophie is about to get married, and wants her father to give her away. However, her father could be one of three men, so she invites them all to her wedding - on a sunny Greek island where her independent single mother, Donna, runs a taverna.

This setting is problematic. Whereas the 2008 film makes Sophie’s dads an Englishman, an American and a Swede, here the whole cast is British. So why is it set in Greece? The ‘Money, Money, Money’ number at the beginning suggests the British invasion of the Greek island is an ironic comment on mass tourism. However, this is not followed through. Instead, the message emerges as the slogan on teenage Donna’s t-shirt: ‘Marriage is an institution for people who should be in an institution’. According to the musical’s sentiment, the contemporary 1990 version should include the ending ‘...except for old people, who’ve already screwed up their life’. When all the sun and songs are stripped away, its a depressing message. 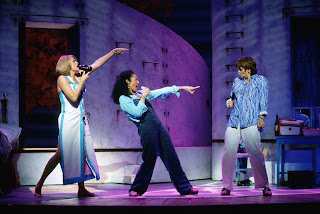 The song cues are so self-consciously blatant, they become the funniest jokes. Particularly so in ‘Take a Chance on Me’, in a scene between Donna’s overly keen friend and the singleton of Sophie’s dads. ‘I walk a lone path’ says Bill, to which Rosie replies, dramatically, ‘If you change your mind, I’m the first in line...’ ‘Chiquitita’, from Rosie and Donna’s other friend Tanya, is another rare moment of a song well acted into the plot. Where the songs fit, the jukebox-style is pleasantly hammy. The middle-aged trio do an excellent ‘Super Trouper’ at Sophie’s hen night, lead by Donna, a superbly cast Sally Ann Triplett. They outshine the dads, who are bland, and impossible to distinguish, with their interchangable solo songs, including ‘SOS’ and ‘Our Last Summer’. 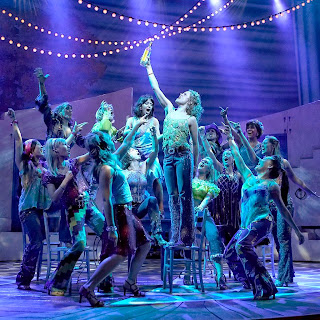 Most of the scene changes are shown simply by moving two curved, white taverna walls. It is disappointingly minimalist, and gives the false impression Mamma Mia! is on a tight budget. If Johnson’s book must take us to the mediterranean, where are the beautiful views of sand and sea? The ensemble is underused, despite that their numbers are among the strongest items. The best is the finale, where the cast shed their characters and sing as if in an Abba concert, dancing the most heavily choreographed routine of the show.

That this is the best part is no compliment to the plot or characterisation. We were standing, clapping and dancing along at the end, but that is thanks to catchy pop songs competently sung, rather than the unspectacular, unconvincing show.

Mamma Mia! Trailer - A Taste of the Show

Sophie - Sophie is about to get married to Sky, and is trying to find out who her father is, so he can walk her down the aisle
Sky - Sophie’s fiance
Donna - Sophie’s mother, always struggling to make ends meet at the taverna she owns on a Greek holiday island. Donna had three lovers, any of whom might be Sophie’s father
Harry - The first of the three men. He was once was a hippie, now working in a bank
Bill - The second of the men. He is a free spirit, a writer and an adventurer
Sam - The third of the men. He is a down-to-earth architect with a dream to live the life Donna and Sophie have
Ali and Lisa - Sophie’s friends and bridesmaids
Rosie and Tanya - Donna’s friends, Super-Troupers, and general moral support