Agatha Christie's legendary whodunit, the world’s longest running play, is still packing them in after more than 50 years in the West End. The reputation of this murder mystery masterpiece goes from strength to strength as new generations of theatregoers are tricked and teased by a plot with more twists than a corkscrew! A group of people gathered in a remote part of the countryside discover, to their horror, that there is a murderer in their midst.  One by one the suspicious characters reveal their sordid pasts until at the last, nerve-shredding moment the identity and the motive are finally revealed. A cracking yarn and an irresistible treat for amateur sleuths everywhere! 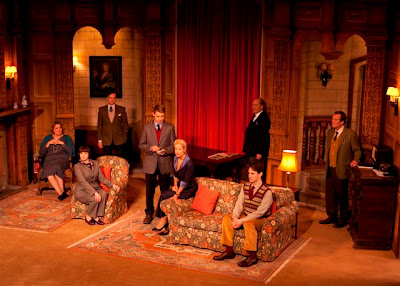 Our Review of The Mousetrap

The Mousetrap is England’s longest running play. It owes its existence to the late Queen Mary, who demanded an Agatha Christie play for her 80th birthday. It is a typically English, Agatha Christie period romp, set in a secluded manor house in a wintry storm. A perfect recipe for a murder.

It would be so easy for a nearly 60 year-old play to become stiff and tired. Yet, it doesn’t. Yes, it is dated, but this is all part of the Agatha Christie charm. The fixed set is the beautiful interior of an old, listed manor house, furnished in 1930s decor, all ready to be cut off by snow. It is annually refreshed by a change of cast, making each performance feel as spontaneous as the last. There are all the classic twists and turns you may expect of a country house murder mystery, and the familiar rouges gallery of suspects, all gathered together as guests at Monkswell Manor boarding house.

There’s an architect, appropriately named Christopher Wren; a retired sergeant major named Metcalf; a typically suspicious continental who turns up unexpected in a snow storm; fussy, old Mrs Boyle, and Miss Creswell, typically played as mannish, in a black fedora. Joining this hotchpotch of guests are the proprietors of the boarding house, young couple Mollie and Giles Ralston, and Sergeant Trotter, who turns in on skis in the snow to protect the house from lurking murderers.

Those familiar with Christie plotting, even if not this one in particular, might be able to spot the murderer reasonably early on. If so, give yourself a pat on the back and a small round of applause, if you do (preferably after you leave the theatre). However, this detracts little from the experience - in fact, the satisfaction of having your theory proved right adds to it. There remain some gleeful surprises, and perfectly crafted suspense throughout.

Going to The Mousetrap, at one of the few privately owned theatres in the West End, run by obliging staff, and beautifully decorated, is a throw-back to 1930s theatre-going. An exciting experience for all the family, reminiscent of a time, before the vast majority of viewers (these days) were born. Just don’t go telling everyone else whodunnit; as the friendly voice normally reserved for the mobile phone message will remind you, that’s strictly against the rules!

The Mousetrap Trailer - A Taste of the Show

Mollie Ralston - Ladlady of Monkswell Manor
Giles Ralston – Landlord of Monkswell Manor, husband of Mollie
Christopher Wren – Named after the architect of the same name. A hyperactive young man who claims to be running away from something
Mrs Boyle – Another guest at the hotel, picky, complaining, and never pleased
Major Metcalf – A retired army general
Miss Casewell – An aloof woman, with horrific childhood experiences
Mr Paravicini – A man who turns up in a storm, having had his car overturned in a snowdrift. Affecting a foreign accent, and made-up to look older than he is
Detective Sergeant Trotter – A policeman who also arrives in a snow storm, come to protect guests from the murderer.