The Phantom of the Opera London

The Phantom of the Opera has been running in the West End since 1986, drawing audiences from all over the world. The haunting musical is based on a classic French thriller by Gaston Leroux about a terrifying and legendary phantom figure who emerges from the depths of The Paris Opera House to haunt the cast of the theatre. He is bewitched by the young opera singer Christine, seduces her, and lures her down into his lair. The Phantom of the Opera has a score of well-known songs, including the title theme, and the bewitching Music of the Night. The production recreates the period french theatre with lavish sets and magnificent costumes.  Terrifying stunts and special effects add moments of shock and horror to the thrilling tale. It is a timeless story of love and passion, but also a terrifically haunting ghost story, a must-see for any West End goer. 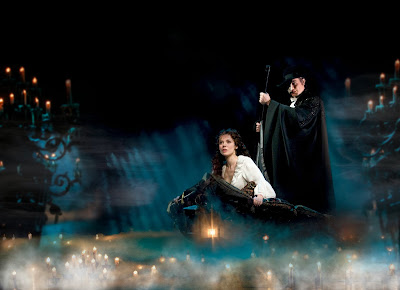 Duration: 2hrs 30mins, including 1 interval
Admission: Recommended age 10+. This theatre will not allow children under 4

Our Review of The Phantom of the Opera

The Phantom of the Opera is a haunting love story adapted from a french novel by Gaston Leroux. Set in a Victorian opera house, haunted by a phantom composer with a brutally disfigured face, this musical has been spell-binding audiences in the West End since 1986. 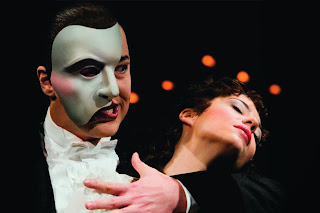 There is certainly something about this production that just works. All the scenes, such as the phantom’s candle-lit lair, Christine’s dressing room, and the misty opera house roof tops, blend together seamlessly. Each one is relevant to the story, and you never feel that scenes have been superfluously added for the sake of song, or dance routine. All this creates a fantastic cinematic feel. Maria Bjornston’s carefully designed set is lush and lavish, perfectly capturing that over-the-top feel of Victorian operetta, slowly transforming as the plot descends into darkening horror.

Even the main and sub plots set each other in perfect balance. In the foreground of the story, the soul of Christine, the newly discovered voice of the opera house, is in jeopardy, fought deftly between her childhood friend Raoul, and the desperate, underground phantom, Erich. In the background, the very future of the beautiful opera house is in jeopardy, and the managers fight for its survival. The love story and behind-the-scenes struggle to keep the opera house compliment each other superbly.

Andrew Lloyd Webber’s music matches the lavish set, and intense romantic story. The desperate, yearning ‘All I Ask of You’, haunting ‘Music of the Night’ and dramatic, sinister title theme all capture the violently swinging mood of the musical. The music will give you a new admiration for the art of composing, and allows you to better sympathise with the ‘Angel of Music’, the phantom, who is also a composer by profession.

There are certain dramatic points in the production, such as the falling chandelier, or the phantom’s voice from the roof of the theatre, which would feel too gimmicky for most productions. But given the excessive Victorian style of the opera house setting, this musical can get away with it. The dangerously swinging set and apparent disembodied voices add to the sinister tone of the production. It is no surprise that The Phantom of the Opera is still attracts so many viewers. It is a beautiful, romantic story, bewitchingly told.

The Phantom of the Opera Trailer - A Taste of the Show