Stomp is the ever-changing, streetwise musical extravaganza.  It comes from a group of eight talented musicians, who can make music with the most surprising of throw-away items, from bin bags to bin lids. Stomp is now fresher, faster and funnier than ever, but still pounds out the same unique, explosively feel-good rhythm. If you haven’t yet had the joy of Stomp, then go and see it.  If you have, take someone to share the pleasure, and enjoy the show’s new material. 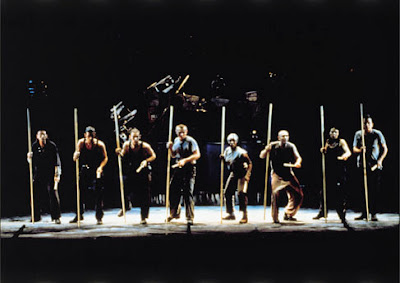 Duration: 1hr 40mins, no interval
Admission: The theatre will not admit children under 5

Our Review of Stomp

Stomp is the street-beat sensation from Luke Creswell and Steve McNicholas, which makes music from everyday objects, bin lids, poles and brushes. It has been a global super-hit, and the show is now in its 21st year, and its 10th in the West End. 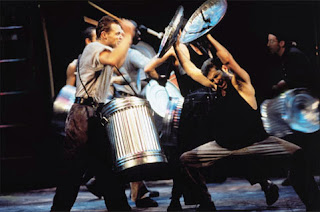 The show is an inventive assault on the ears, and an impressive spectacle to the eyes. You admire the cast members’ musicality and muscularity, as they leap around the stage, crashing giant bin lid cymbals, bashing their wooden pole 42nd Street-style canes, and genuinely having musical fun with rubbish. It's rhythmic, it's authentic, and it's original; despite what you’ve heard prior to the show, you’ll come out marvelling the rhythms that can be made out of the most ordinary objects.

The best, most creative item, is the percussion high wire item. A series of clanging metal drums, made from any old iron, a wheel hubcap, a kitchen sink, or an oil drum, are attached to the scaffolding backdrop, and a number of the cast are harnessed to it, suspended in mid air. By swinging from side to side in time, and rapping the makeshift drumkit, they create a massive sound and a catchy beat.

The show’s lack of narrative is a small downside. Not a disappointment, since you can’t go to this most famous show expecting a story, but nevertheless, we feel the show lacking. Though each method of creating beats is different, the range of sound you can make from everyday equipment is limited. There is definite musical progression within an item, but there is no narrative link between them. After loud, crashing item followed loud, crashing item, we felt our attention beginning to wane: though the equipment varies, the quality of the sound does not. We are impressed with the show, but the best, material could be squeezed into an hour, and it would have more impact.

Stomp Trailer - A Taste of the Show