Experience the majesty of Disney's best-loved film on stage at the Lyceum Theatre. Simba's moving story, on his journey from lion cub Prince to King of the Beasts, adapts extremely well to the intense, artistic experience of theatre. The show is a spectacle, with a rainbow of colourful costumes and sets, inventive puppetry, and music from Sir Elton John, that will transport you into the Serengeti Plains of Africa's heartland. With new music and new scenes not found in the film, this absorbing African stage adventure will captivate those familiar or unfamiliar with Simba's compelling story. 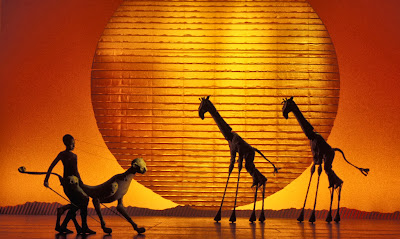 Our Review of The Lion King

It would be difficult to find a film more suitable to be adapted for the stage than Disney’s The Lion King. Everything about the musical transports you thousands of miles away, to the African Savannah, where lion cub Simba is growing up as the heir to the King of the Jungle, Mufasa.  After tragedy and treachery strike, from Simba’s wicked uncle Scar, Simba is banished from the pride - forever.  This classic Hamlet plot has graced boards across the world for centuries, but simplified in The Lion King in this dynamic stage musical, and given life in an exciting animal setting, it is absolutely spell-binding for children and adults alike. 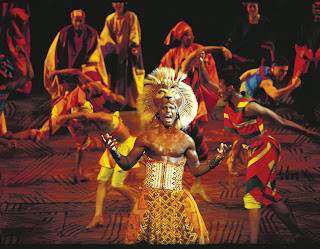 The 50-strong ensemble play all the animals of the Serengeti, from hyenas to elephants.  The young actors who play cubs Simba and Nala have extraordinary stage presence for two so young, and hold their own among the adult actors, gallivanting around the stage with boundless energy. The puppeteers are masters of a difficult skill: Timon and Zazu are both compelling and comic, perfectly transformed from their animated originals, likewise with humour working on a number of age levels.

The music takes Elton John’s original score for the film, and adds to it a crowd of new numbers. The original score is by far the most memorable, including most notably the touching songs ‘He Lives in You’ and ‘Can You Feel The Love Tonight’ which occur at particularly poignant moments in Simba’s life. The songs which have a particularly African feel, ‘The Circle of Life’ and ‘In The Jungle’ are also bring an African ensemble vibe to the production.  In these songs particularly, the musicians in raised boxes to the sides of the stage, come into their own. A variety of African instruments are on display, creating a sound simultaneously African in flavour and theatrical in impact. Unfortunately the new editions to the score, particularly ‘Morning Report’ and ‘Be Prepared’ are largely unremarkable, and you’re unlikely to leave humming to them. Without the added support of the movie fame, they are largely unmemorable. 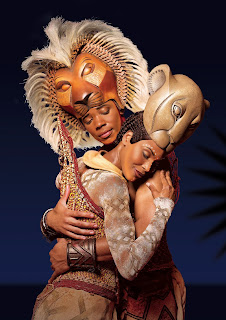 The attention to detail in all aspects of the design, the costume, the set and the props makes for engrossing viewing. Of particular note in the animal parade are the ingenuous masks bounce on the foreheads of the lions showing anger, intimacy, and intimidation, and the stilted actors on all fours parade down the aisles as giraffes. Block colour back-drops change to project the changing primary colours of the Serengeti panorama. This feature comes into its own in what is probably the best staged scene of the play, the wildebeest stampede through the gorge.

The Lion King is a vibrant, energetic African adventure, especially suitable for family viewing. The music is pleasing, though with some exceptions thanks to Elton John’s talents, largely uninspiring. But the African vibe which pervades the visuals and the music guarantee to make The Lion King a transporting, visual extravaganza of an experience.

The Lion King Trailer - A Taste of the Show

Simba - A young lion cub who transforms into a majestic king lion, but banished from his homeland for a crime he did not commit
Nala - Simba's favourite childhood friend, turns into a beautiful lioness
Timon and Pumbaa - A meerkat and a warthog, Simba's unlikely friends who take him under their wing
Mufasa - The king of the jungle, and Simba's wise, good father
Rafiki - The shaman baboon, a dear friend to Mufasa, often the wise voice of reason
Scar - Mufasa's brother and Simba's uncle, a lion intent on taking Mufasa's place
Zazu - An impatient hornbill, adviser and organiser to Mufasa, but whose main job appears to be baby-sitting naughty lion cubs
Shenzi, Banzai and Ed - Three scavenging hyenas who strike terror into the heart of the lion cubs