Moonwalking into the West End is Thriller, Live, after tours in the UK and Europe. It celebrates the career of The King of Pop, Michael Jackson, and the Jackson 5. Michael Jackson sold an unparalleled 750 million records, with the Thriller album counted the best selling album of all time. The spirit of Michael Jackson is brought back with state of the art multi-media effects, and choreography by the director, Gary Lloyd, whose track record includes working with Leona Lewis, Will Young and Robbie Williams. The Thriller show includes all your favourite Michael Jackson songs, including smash hits ‘Billie Jean’, ‘I’ll Be There’, and ‘Earth Song’, and, of course, ‘Thriller’, performed by a talented cast, superbly choreographed, and a live band. 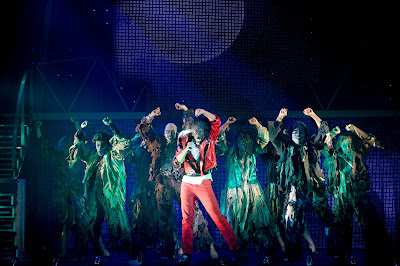 Duration:
Admission: This show contains bright lights and strobe effects, and is not suitable for people with photosensitive disorders. The theatre will not admit children under the age of 5.

Our Review of Thriller Live

Thriller - Live is a spectacular concert with a twist of the theatrical, celebrating the person and music of Michael Jackson. The show can of course only be a representation of the man himself. Yet it succeeds in bringing us as close as possible in both familiar and new, imaginative ways.

Thriller Live delivers a funk filled two and a half hours of Jackson’s most popular songs and dance moves by a talented cast and live band. Expect to hear your favourite Jackson songs delivered almost faultlessly by an array of accomplished soloists. Each bring out a different side of Jackson - whether it is his high vocals or his moonwalking skills. The performers’ singing and dancing skills, combined with their accurate costumes, recreate some great versions of Jackson’s original songs. 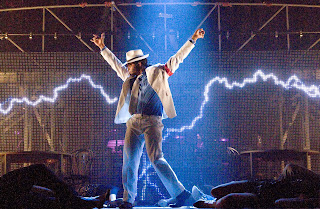 Thriller - Live is more than just a reel of Jackson’s greatest hits punctuated by narration. It takes us on a journey through Jackson’s life, from the early Jackson 5 days to his messages of peace and anti-racism. The cast’s costumes develop with the times as they move between each song fluidly and theatrically. The show alternates his funky, irrepressible pop songs, performed with a contagious energy, with the evocative and melancholy solos.

It is a show for the young and old alike, and even for the less enthusiastic Jackson fans. It is guaranteed to have you crooning and clapping along, leaving you humming your favourite Jackson song on the way home. We challenge you to find an experience of sensual Dirty Diana, smooth moon-walking Billy Jean, or the excellently grotesque Thriller, that (excuse the pun) beats it.

Thriller Live Trailer - A Taste of the Show