We Will Rock You London

We Will Rock You is set in a futuristic, fully globalised utopia in which Earth has been renamed Mall. It is totally commanded by software company Globosoft. In this digital world, people act the same, behave the same, think the same. Where, in this homogeneous, perfect world, is the need for originality? A growing resistance believes the need is there, though it has been drowned by blissful, foggy ignorance. This band of rebels call themselves the Bohemians, and are searching for their Rhapsody. First, it needs a leader, to aid them to Break Free. The resistance wants to emerge from the masses and claim personal freedom. This futuristic musical incorporates 32 of Queen’s classic hit songs, including Bohemian Rhapsody, Somebody to Love and A Kind of Magic, blending the familiar sound and lyric of Britain’s favourite rock band, with destabilising, unfamiliar images of an alien future. 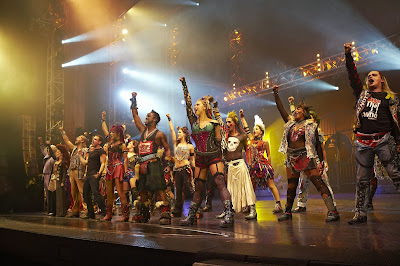 Duration: 2hrs 45mins, including 1 interval
Admission: Recommended age of 10+. The theatre will not admit children under 4

Our Review of We Will Rock You 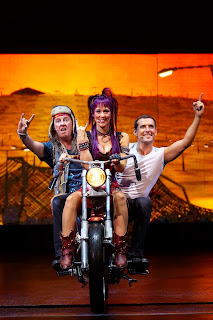 We Will Rock You, from Ben Elton and Brian May, is set in 2302, on an Earth where all music is computer generated, and regulated by the capitalist totalitarian rulers, Globosoft. The premise is instantly recognisable: in Simon Cowell’s music industry, the talent of the individual is becoming increasingly irrelevant. Unfortunately, there are only a small handful of Queen songs which fit, ‘Break Free’, ‘One Vision’, and ‘Bohemian Rhapsody’. Beyond this simple idea, there is little more to the plot, so your view of the musical will be almost entirely subject to your love, or otherwise, of Queen.

In its favour, the musical is densely packed with songs, performed with loyal adherence by the band to Queen’s originals. However, the plot twists in lots of unlikely directions to accommodate them. This is clear in the romance between Galileo and Scaramouche, which is shaped so as to provide Scaramouche with some weak sexual innuendos, funny at first but which quickly tire, and to accommodate famous tunes which wouldn’t fit anywhere else, such as ‘Hammer to Fall’. The love story itself is implausible, too abruptly changing direction. The two leads chase each other pointlessly round the stage, looking unconvincingly querulous or desirous. 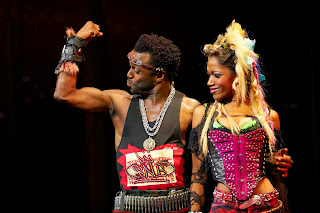 More exciting are the scenes with Brenda Edwards playing the ruthless Killer Queen, who steals not only the best songs, but the biggest costumes, and is accompanied by the grandest set pieces in dance and design. The Globosoft scenes are futuristic, sleek, and shiny. ‘One Vision’, opening the second act, exemplifies the backdrop of moving digital panels, portraying the consumerist culture age. It is also used to great affect in Khashoggi’s torture fest scene, with the number ‘Flash’. These digital-age scenes, conducted in the bright colours of the manufactured world, contrast to the faded grunge-rock style of the ‘Heartbreak Hotel’ (derelict underground station) scenes. The most memorable piece by the Bohemians is Meat’s solo rendition of ‘No One But You’, a poignant tribute to all the dead rock stars the musical champions. 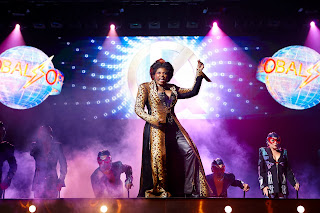 The issues about modern music are thought provoking, but the weakness of the story does not do them justice. The variable suitability of song and plot means that the show will not be as enjoyable for strangers to Queen, who will find the songs largely irrelevant. Teenage and adult fans of Queen will all enjoy it, though this is with greater thanks to the merit of Queen themselves, as the talent behind the songs, than Ben Elton, who wrote the story.


Check out critics' reviews we've compiled for you

We Will Rock You Trailer - A Taste of the Show

Galileo Figaro - He is the leader the Bohemian rebels have been searching for.  Lyrics from the past just come into his head, and he knows the ‘sacred texts’, Bohemian Rhapsody, without having read them.
Scaramouche -  A misfit within the gaga girls, she dresses all in black.  She gets herself incarcerated, and joins up with Galileo, who christens her Scaramouche
Brit - The craziest, loudest, most passionate of the Bohemians, Brit names himself after ‘rock ‘n’ roll legend’ Britney Spears. He will stop at nothing in the fight for his cause
Meat - Brit’s ‘chick’, she names herself after Meat Loaf. She will stand by Brit to the end, and is also a passionate rock ‘n’ roll believer
Pop - An old-timer Bohemian, Pop is a part of the furniture in the Seven Seas of Rye, the place to which all rebels are banished
Killer Queen - The scary, sexy, merciless ruler of Globosoft.  Her goal is to eradicate the Bohemians to stop the quest for the hidden music in its path
Khashoggi - The commander of the Globosoft police, employed to do the Killer Queen’s bidding. He has a taste for power and suffering, but is at the mercy of the Killer Queen’s whims.