What happened in Oz before Dorothy dropped in? Based on the book by Gregory Maguire, Wicked approaches L. Frank Baum’s famous story through the eyes of the two witches growing up in Oz, Elphaba and Glinda. School enemies turned school friends, they develop into their typical ‘Good’ and ‘Wicked’ roles - but there is more to them than these labels imply. Experience the unforgettable Wicked, and you’ll see you’ve not been told the whole story about the land of Oz. 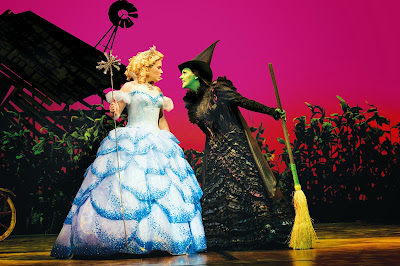 Duration: 2hrs 45mins, including 1 interval
Admission: Recommended age 8+. The theatre will not admit children under 4. This production includes stage smoke.

Our Review of Wicked

Wicked is based on a novel book by Gregory Maguire. It is in most respects a prequel to The Wizard of Oz, mostly set before Dorothy dropped in. It describes the back story of the two witches, Glinda the Good, and the Wicked Witch of the West, here named Elphaba. Glinda is a self-obsessed, peachy, popular blonde, and Elphaba a marginalised misfit with lurid green skin. They meet at the University of Shiz, Oz, which bears no accidental resemblance to Hogwarts. Their love-hate relationship paves the way for two very different paths, both influenced by an illuminating meeting with the not-so-wonderful Wizard of Oz. Elphaba and Glinda both achieve their reputation more through turn of circumstance than character. The story shows that even in Oz, things aren’t black and white. 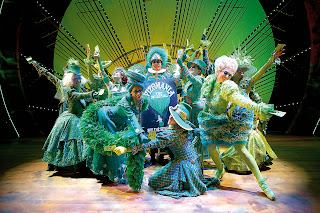 There is wit to Winne Holzman’s book and Stephen Shwartz’ lyrics, and the songs cohere to the story. In ‘Dancing Through Life’, which incorporates some dynamic ballet-inspired spins and leaps from the talented ensemble, Fiyero has the line ‘stop inviting strife, learn to live the unexamined life’. The power ballad theme, ‘Defying Gravity’ rests just on the right side of smultz, and in contrast, the simple, delicate love song ‘I’m Not That Girl’ shows both the girls when at their most vulnerable. Rachel Tucker, as Elphaba, has lungs of steel. Her solo renditions are easily the best executed songs of the show. The sisterhood bond between the two witches is for the most part convincing, but it becomes increasingly morally overblown towards the end. In the final song between them, ‘For Good’, the gooey righteousness slips into the sickening. 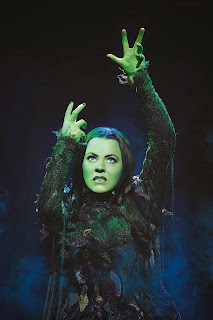 The show is packed with bright lights, wide skirted costumes, and billowing stage smoke. All of these evoke the fantasy land of Frank Baum’s creation. The set, including a massive dragon head, protrude out of the proscenium arch, expanding the scale of the performance. The inside is based on a glowing, clockwork theme. It has moving scenery, creating additional levels for the actors. It creates an impressive spectacle, especially in the crowded chorus numbers, where the large, detailed costumes of the ensemble battle for space on stage. Particularly awesome are the Emerald City scenes, in which the stage and costumes shine with the lurid green glow that is iconic of Wicked.

The idea of Wicked is an interesting one. It is magnificently set and well performed by most of its actors. It occasionally over-indulges in its morals, but the production will work such a spell on its viewers, especially the teenage girls among them, you’ll not notice you’ve been morally edified.

Wicked Trailer - A Taste of the Show

Elphaba - Destined to become the Wicked Witch of the West. A misfit child with lurid green skin, who becomes a marginalised young woman, but with strange magical powers
Galdina - Destined to become Glinda the Good Witch of the North. A pretty, popular blonde at university, Galinda is used to having everything her own way
Fiyero - A young man who attracts the attentions of first one, then both, of the two young witches
Madame Morrible - The sorcery teacher at the university
Dr. Dillamond - The only animal teacher at the university
The Wizard - The wonderful, and mighty Wizard of Oz, it is Elphaba’s dream to one day join him
Nessarose - Elphaba’s infirm sister, and much the most loved
Boq - A Munchkin besotted with Galinda from the first time he sees her