The Woman in Black London

Since 1989, over 7 million people have come to see one of the most exciting, spooky, gripping and successful theatre events ever staged. Stephen Mallatratt adapts Susan Hill’s best selling ghost story for theatre, combining film noir influences with the intensity only achievable in live theatre. Let yourself be transported to a ghostly, terrifying world, and marvel at the awesome, unremitting drama of the experience. 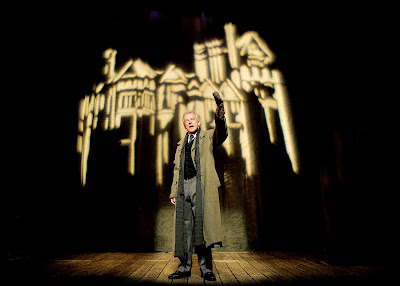 Our Review of Woman in Black 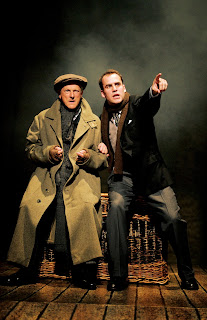 The Woman in Black is a stage play adapted by Stephen Mallatratt from the ghost story novella by Susan Hill. It’s an unashamed scary romp, set (where else?) in a haunted house, on an isolated northern island, surrounded by dangerous quicksand flats. Solicitor Mr Kipps has been given the news that his client, Alice Drablow, has passed away. Alice lived on the remote island for most of her life, and he must go there to sort out her affairs. Everyone in the village nearby clams up when Mrs Drablow or the island is mentioned. Something is wrong, and it involves the mysterious woman who was the only other guest at the spinster's funeral.

The action that takes place on the island is gripping stuff. The buildup of tension is gauged just right, so that I jumped at simple disembodied noises and sudden movements. This is impressive, since a thriller often works better as a novel or a film, than it does as a play. This is thanks to the restrictive aspect that these media can generate, leading to easy suspense and claustrophobia. It is harder with a stage play, where it is more difficult to channel an audience’s attention. Silent entrances, intelligent lighting, and clever use of the sparse set - in particular, a film dividing the stage, transparent only when it is lit from behind - all help to hide the island’s secrets. None of this is techno-science, it is just attention to detail on the part of the design team. 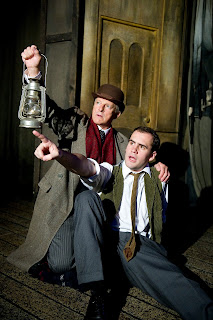 It is really thanks to the added ‘play-within-a-play’ structure of Mallatratt’s adaptation, that Hill’s story works at the theatre. This takes some explaining. Are you ready? An elderly Mr Kipps comes to a young, flamboyant actor for help. He wants to recite his story so that he can purge his mind of his ‘demon’, (you’ve guessed it) the Woman in Black. The actor, unable to endure the boring reading voice of Mr Kipps, agrees to put his demon to rest by performing Mr Kipps’ part himself. The tale unfolds, with the young actor playing a young Mr Kipps, and Mr Kipps playing all the bit parts.

The humour of this added layer - it makes sense in the theatre if that did not - prevents the simple story becoming unnecessarily indulgent. The intimacy of the theatre lends a perfect claustrophobia to the scares, as well as making the empty stage set of the actor’s story-telling convincing. That The Woman in Black has continued many years at the Fortune Theatre is testament to both to Hill’s and Mallatratt’s license to thrill within the mechanisms of their own media. The play is proof that you don’t need techno-wizardry to scare or excite.  All you need is a good story and some skilful acting.

Woman in Black Trailer - A Taste of the Show

Arthur Kipps - a solicitor summoned to the funeral of Mrs Alice Drablow, a secluded woman who lived alone. Within the play there is another play, in which Kipps plays all the people he meets in his adventure, but not himself
The actor - An actor who helps Kipps tell his story, by playing the part of Kipps in the play within a play.